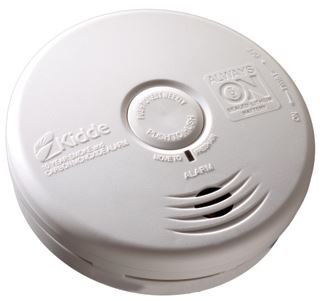 The Kidde P3010K CO combined smoke and carbon monoxide detectors are the ones which I most highly recommend because their built-in sealed lithium battery lasts for 10 years of continuous operation!

Although it may seem that having a battery which lasts the entire life of the alarm is only a matter of convenience, it's much more than that. It greatly enhances the safety and effectiveness of the detector because it will never fail in an emergency due to someone forgetting to replace the batteries.

The K in the product name stands for 'Kitchen' because the smoke sensors have been specifically developed to reduce false alarms caused by cooking, while still sounding the alarm when a potentially dangerous situation has arisen - and cooking is the main cause of home fires.

It is however suitable for all areas of the home where you want a combination smoke and carbon monoxide alarm - there are other smoke alarms in the Kidde P3010 range, however they do not include the ability to detect carbon monoxide.

I personally believe that the P3010K is the most practical and cost effective combined Smoke & CO detector currently available for home use.

Usually selling for around $40 to $50 it is more expensive than the cheapest models available, however when you factor in the 10 years of replacement batteries you will never need to buy, the total cost of ownership is less than other models.

CO is the chemical symbol for Carbon Monoxide.