The Kidde KN-COSM-B is a combined Carbon Monoxide and Smoke Alarm in a single unit. 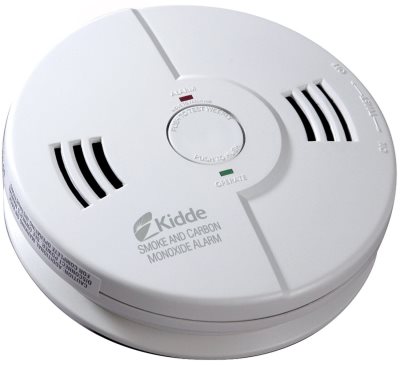 I had deliberately not included any of these type of alarms on this website previously because although they are perfectly acceptable units, the optimal position in which to place a smoke alarm and a carbon monoxide detector are different - the CO Alarm works best when positioned somewhere between eye level and two feet below the ceiling, while a smoke alarm works best attached to the ceiling itself.

A detailed explanation of why this is the case can be found here.

That being said, after receiving several emails suggesting that I should include a combined CO & Smoke Alarm, I've decided to present the facts to you, and let you make your own decision.

Although the ceiling is not the optimal place to put a CO Detector, it is certainly a better place than none at all. For those of you on a budget it is much safer to get a combined alarm like the Kidde KN-COSM-B than to chose to install only a Smoke or CO alarm separately.

Get the updated Kidde KN-COSM-BA and the latest customer reviews at Amazon.